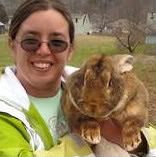 I raise and sell Flemish Giant Rabbits. Currently I only have the Sandy color but hope to get many other colors in the future. I really LOVE this breed. These are the largest rabbits in the world. They can weigh over 20 lbs!! My male is named Grinch and he is two years old. He is the one I'm holding in the picture above. My oldest doe is Cindy Lu who is almost 2 years old. I also have a doe named Horton who is a bit over a year old. Then there are my two junior does- Thing 1 and Thing 2 who are 7 months old. I also have 14 newly weaned popples. Alot of people call baby rabbits popples due to the way they "pop" all over the place.
Flemish Giant Rabbits
Flemish Giants are the largest rabbits in the world. Many weigh over 20 lbs and there have been reports of some weighing up to 28 lbs! Even though they are extremely large, they are the sweetest, most gentle rabbits in the world! Mine have never bit anyone, love attention, follow us around like puppydogs, and are calm. They are not hyper little beasties that delight in nipping fingers or running away from people.
Flemish Giant Rabbits require very large cages due to their size. Mine are in cages that are 3'w x 6'h x 9'l. They have a hard time with wire floors. I line the bottoms of my cages with flakes of hay to make it much easier on their feet. Hay works well as (for me) it is cheap and allows urine to fall through. Every week I replace the hay. They hay then goes into the chicken coop and the chickens eat the hay seeds. Then hay is used as a mulch in the gardens. Rabbit poop is EXCELLENT to use on your gardens.

Flemish Giants also greatly benefit from having fresh hay in their pen at all times. This is different hay than the floor liner. This hay is put into a hay trough so they can't poop/pee on it. I feed mine an 18% protein pellet in addition to hay and fresh greens/weeds daily. Mine LOVE their frozen watermelon and cantaloupe every day in the summer. Flemish Giants do very well outside in the winter, but have a hard time with summer heat. This is why mine get the frozen fruits around noon every day that it's hot out. They also benefit from bottles of frozen water placed in their cages for them to snuggle up against when it's hot out.
Posted by Jasmine at 9:44 AM